The Kaziranga National Park (see Wikipedia) spreads along the banks of the Brahmaputra river running through the state of Assam, India.

This World Heritage Site is famous for its one-horned rhinoceroses (let’s call them rhinos from now on). A safari in the park is either on tame elephants or in an open jeep. Whereas the elephant-safari offers a view of the deepest parts of the jungle, allowing one to get very close to the rhinos, the downside is that they don’t cover much distance and you have to depend on your luck for wild-animal sighting. Given the vastness of the park and the variety of wildlife, we decided to take the jeep-safari. 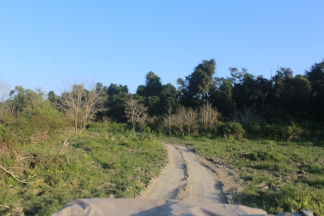 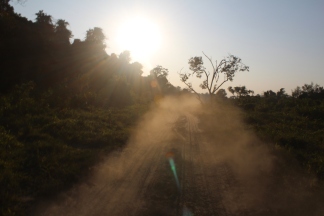 A downside of jeep-safari? Too much dust! You will have to protect your camera very carefully and clean the lens every once in a while (given how the jeep jerks, that’s not easy).

In the marshland, we came across wild buffaloes, herds of deer, wild otters jumping into a lake, and lots of birds, including one that resembled a crane and walked in the slowest possible speed.

We had even seen a herd of elephants taking a bath at a distance, through my father’s zoom lens (I was taking wide-angles).

And another! It was all the way across the water-body.

However, the one-horned rhinos still eluded a sighting.

We drove along the marshlands and entered the deep jungles, the grasslands. For a long time, we did not spot any wildlife, except a rare Sambar, a very shy creature that fled on sighting us from a distance. The only companion was the chirping of innumerable birds. That is one sound that can make you feel so alive to nature… However, a rhino was still nowhere in sight, and our spirits began to sink. After a while, we came across these giant footsteps: 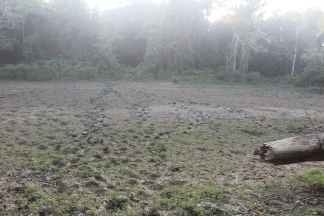 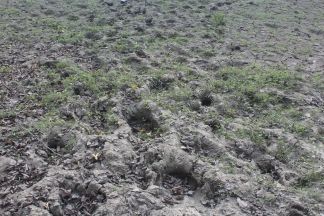 They were not fresh. Still, our hearts began to thump. Nature did not disappoint — five minutes later, we encountered this blocking our way: 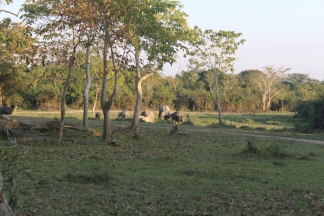 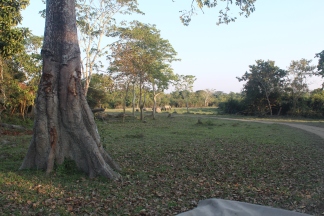 The herd spread around, one of the young-adults remaining closest to us. 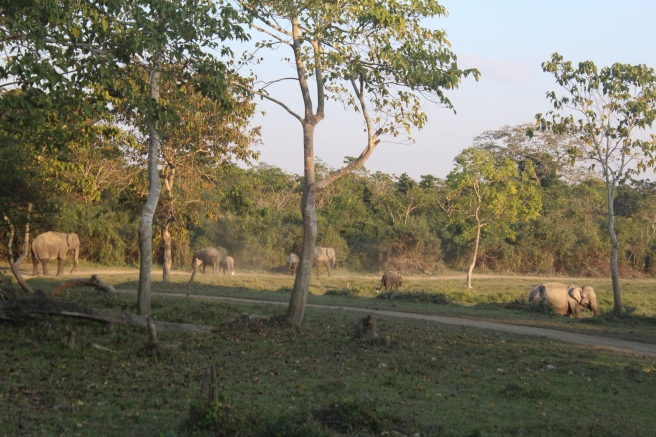 We waited and observed silently. These wild creatures from so close? I had never imagined this and was devouring the view. We observed that the intention of the adult elephants was to dry themselves off, so they went to the Sun, started gathering dust in their trunks and then blowing it onto their own legs. The babies were more interested in catching a snack of whatever they found suitable.

There was no noise around us except the chirping of birds and the occasional trumpet from one of the adults. It was bliss. Slowly, however, they were starting to move closer to the edge of the jungle. Only the young-adult still remained very close to us. 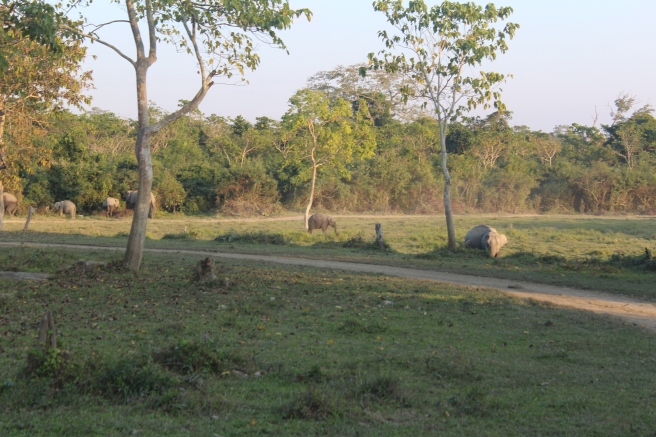 At this point, however, another jeep joined us from behind. It was packed with tourists, who were so happy at this sight that they started talking and pointing loudly, totally oblivious to the threat they were posing to us and themselves (remember that elephants are one of the most dangerous and unpredictable animals, see more here) and had to whispered to be kept quiet. I bet they thought that there was a game going on and would have started cheering, if not told. Believe it or not, one of the young ladies in the jeep promptly took out her phone in a selfie-stick and started shooting selfies with the elephants at the back! Sigh, this is how badly the selfie-bug has hit us. Thanks to the commotion created by these wonderful fellow human beings, the elephants decided to take our leave and disappeared into the jungle. As soon as they did, the dear fellow humans happily drove past us and the young-adult elephant, who was still in his position. We found ourselves covered in dust.

We waited patiently. However, the herd did not come back. They were most likely on their way to deeper jungles or having an early-evening snack. So we made a move. Although we could not stop as we drove past the young-adult, I still managed to get some close-ups: 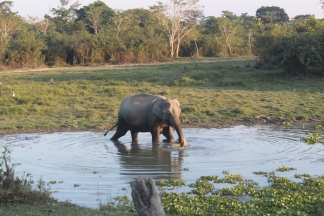 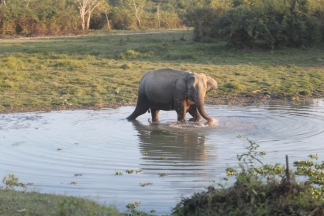 It was still splashing the waters! And then as we took the turn along the road, a surprise awaited us! Please excuse the infinite jerking of the jeep — there were five of his mates still in the waters, probably the reason he was too. 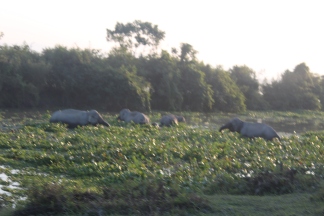 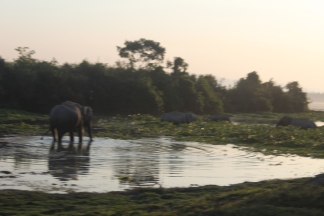 We stopped after we had passed them.

A little ahead, we noticed another huge water-body at a distance, and in it was a wild creature. 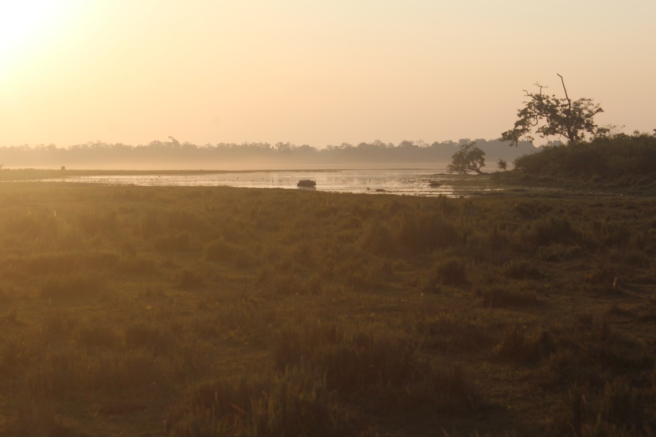 Zooming in revealed that it was indeed a rhinoceros. For a lack of a better picture, here’s one at the first sighting of this one-horned being:

A little ahead along the road, more surprise awaited us. Just a little to the left of the road, we saw this guy:

Stopping for long so close to it was dangerous. Although rhinos are herbivorous creatures, they could kill you if they attack. As we moved on, we saw a herd of wild buffaloes, close to a distant watchtower. 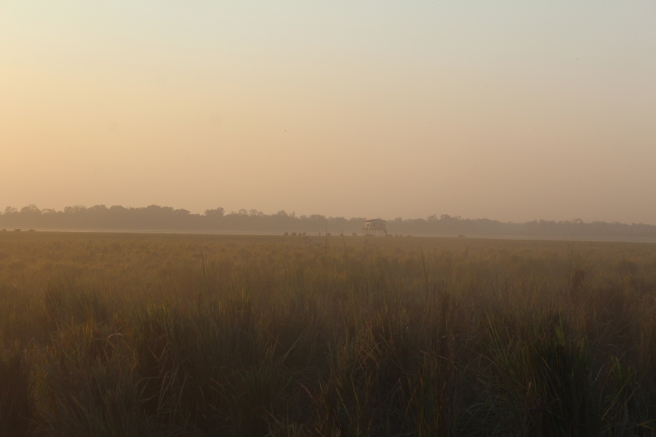 The Sun was about to set, so we headed back. It was an experience worth remembering for a lifetime.

View all photographs from the trip.

6 thoughts on “A Tryst with the Giants”