This is going to be a post that is not going to do justice to on an experience that has been fulfilling in so many ways. I am going to bombard it with photographs and photograph-links, and details of the route. If you are not interested in the details and want to just take a look at all the photographs, here you go.

Sandakphu — the highest peak of the state of West Bengal, India, at its border with Nepal. This was on my to-do list for a long time. I took the opportunity to take a break from my schedule and book the trek with the Youth Hostels Association of India, with whom I had had previously done a cycling expedition in Ladakh.

This time, I had my friend Yash accompanying me from Mumbai. We reported at the base camp in Darjeeling on the 16th of May, and next day our expedition started. Our group consisted of 35 individuals. We were transferred by jeep to Dhotrey via Mane Bhanjang, which is a border town between Nepal and India. In fact, one side of the road and all the shops are in India, while the other side is Nepal. All shop owners accept both currencies.

I don’t have words to describe the beauty of the trail. I know, clichéd. But I don’t think I can help much. Instead I will direct you to this video and some of these photographs:

We had pre-ordered lunch at the “Trekker’s Hut” in Tonglu, and went downhill for about half an hour to reach the small Nepali town of Tumling. The trail was entirely via Nepal, until we reached the main road which is in India, and then stayed in a home-stay facility in Nepal.

We had to, sadly, leave this beauty behind. The trek to Kalipokhri was going to be longer, and we had to pack lunch from Tumling which we would later have at a stop.

The day was extremely misty. The constant change of weather, from the stuffy to the rainy, and the need to put the poncho on and off, was a bit of a trouble (read: lots of struggle). The good part was the beautiful show of rhododendrons, magnolia and orchids on the way.

Do take a look at the following photographs:

We kept on crossing the border back and forth, and the thrill was soon lost at the repeatability of the event. At Gairabasa, another border town, we had momos at Indian huts situated in Nepal.

This was going to be the big day. Lunch was to be had at Sandakphu, so we started earlier than usual. We saw a lot of orange, violet and pink rhododendrons. Sometimes, the trail was covered with these dying flowers from a tree, while another would form a canopy over it. Misty, windy, rainy, and muddy — the experience was dampening to the soul. The fact that the trail often met the motor road and hence the frequent passing of jeeps both ways, added to the bitter experience. Until a kilometre from the base of the summit, and the weather started clearing up. Giving away to staggering views of the valleys below, and fiery red jungles of rhododendrons on the slopes.

The last one kilometre of the climb was very steep, and it takes some time to cover this part. But it also offers the most breathtaking views, so the time is well-spent. At the end we reached a plateau which houses a number of concrete home-stays and forests of mauve rhododendrons. The Sandakphu summit itself is a separate, very sharp (~100 meters) climb on its own, from the Sandakphu plateau.

The next morning, just before sunrise, we set out for the summit, to try our luck at better views. And what luck it was!

After an eventful sunrise that spread a sense of satisfaction in us and erased the gloom that had spread through the last few days, we began to descend to Gurdum.

The weather was excellent throughout the day, with the bright sun accompanying us all the way.

We walked down forests filled with pink rhododendrons. Which gave away to sparser forests of red and yellow rhododendrons and magnolia, then dense pine forests, and then to denser forests of lower altitude plants, including bamboos. The changing landscape was breathtaking. Berries of different kinds, including strawberries, punctuated the fields. 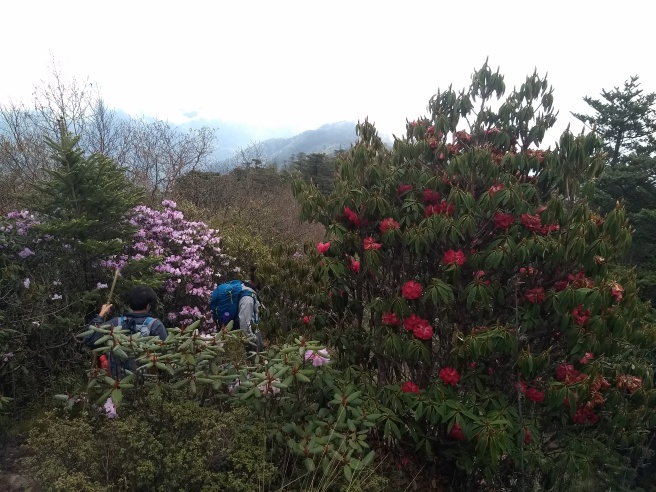 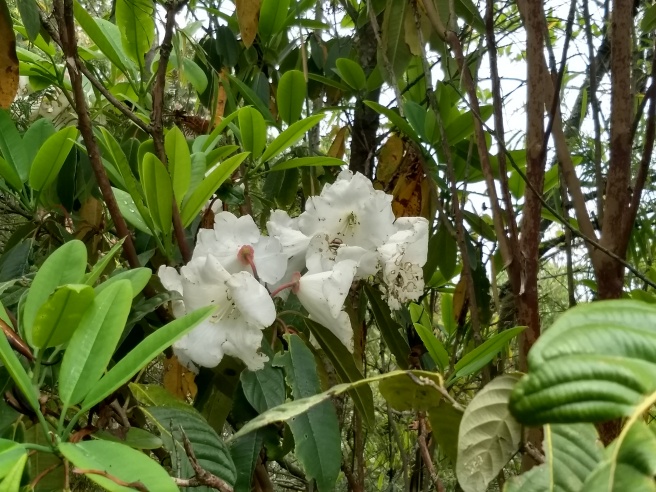 Just before reaching the campsite, the bloom of daisies awaited us.

This was our first day of encounter with a river on the way, river Rammam. Also, the last day of the trek. The first part of the descent to Sirikhola was via dense pine forests.

The most striking feature of this part of the stretch is the diversity in the greenery. 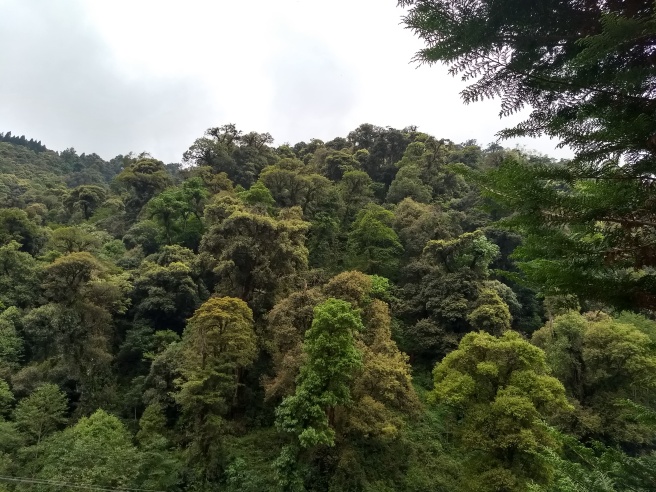 After Sirikhola, the road to Rimbick is the same concrete road that are used by motors. 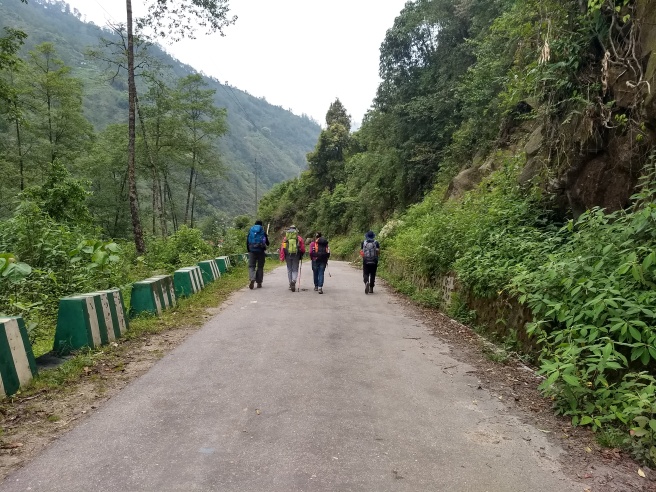 After the transfer to Darjeeling by car the next day, it was time for us to say goodbye to the newly-made friends. Yash and I travelled to Gangtok the same day, and the next day we made a trip to Tsomgo Lake and back to Gangtok, before going down to Siliguri for the journey back to Calcutta.